I recently heard from the Holminer Rebbe, Rabbi Sholom Yehuda Gross, discuss the coming of Moshiach. He quoted the following:

PASSAGE FROM THE HOLY ZOHAR (II, 58) WRITTEN 1800 YEARS AGO BY RABBI SHIMON BAR YOHAI, MAY HIS MERIT PROTECT US:

“Rabbi Yitzchak said: In the future seventy princes from all over the world will unite with the masses to attack Jerusalem and plot against G-d. They will plan to battle Him, then fight over His people and Temple. However, “He who sits in heaven laughs, The Lord will mock them” (Psalms 2:4). In His glory, G-d will wipe them from the face of the earth. Rabbi Abba said in the name of Rabbi Yisa Sabba, and Rabbi Shimon Bar Yohai also said: In the future, G-d will revive (reincarnate) and reinstate all the kings who oppressed the Jewish people and ruled Jerusalem: Adrianus, Lupinus, Nevuchadnezzar, Sancheriv, and all the others who destroyed His house. They will unite with other nations. The Lord will announce: “And this will be the plague with which G-d will smite all the nations that mobilized against Jerusalem…” (Zechariah 14:12).”

PASSAGE FROM THE HOLY ZOHAR CHAPTER OF VAYERA, PAGE 119a:

“The children of Ishmael will at the same time, rouse all the peoples of the world to come up to war against Jerusalem, as it is written: “For I will gather all the nations against Jerusalem for war” (Zechariah 14,1), and it is also written: “The kings of the earth set themselves, and the rulers take counsel together against the Lord and against his Mashiach” (Psalms 2, 2).”

Saddam Hussein believed that he was a reincarnation of Nevuchadnezzar.

Obama may be Pharaoh…. 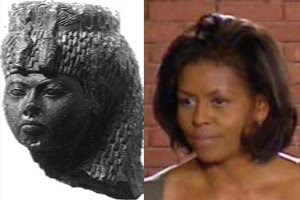 We all know how things ended for Pharoah…. subject of my next post, what we can expect in “Egypt” over the last 22 months of Obama’s presidency, including the coming “PLAGUE OF DARKNESS”.

The Gematria of 240 is Amalek.

I remember as a child collecting quarters in the ‘Untied’ States of America. The quarter that I enjoyed the most was the 1776 – 1976 quarter, celebrating 200 years of ‘freedom’, or so I thought.

It may come as a surprise, but July 4, 1776, fell on the the 17th of Tammuz, which commemorates the beginning of the three weeks of mourning leading up to the destruction of the 2nd Beit Hamikdash, may it speedily be rebuilt in our days! https://www.hebcal.com/converter/?gd=4&gm=7&gy=1776&g2h=1

Although the United States has resulted in unprecedented ‘physical freedoms’, the spiritual Holocaust of the Jewish people continues unabated in the United States as more than 50% of all Jews choose to marry out.

The ‘leader’ of the good old USA (does USA mean “ESAU”?), has recently taken off the kids gloves and is now showing the world his true intents and designs….

And if there is any doubt of the President’s true personal beliefs, his own words speak for themselves…start around 1:15 into the video…

Its time for the Jews of the USA to leave the Avodah Zarah and come back to their true mother, the Land of Israel (Eim Habanim Semaicha) while there is still time to come with free choice… Let’s not forget – 80% of the Jews died during the plague of darkness…. and did not merit to leave Mitzrayim – the false veneer of safety in the United States is about to come to an end….

A Baraita in Sanhedrin describes the seven-year cycle preceding Moshiach’s arrival 97a): “The Rabbis taught in a Baraisa: The seven-year cycle when the son of David will come: In the first year, this verse will be fulfilled: I will bring rain on one town, and on one town I will not bring rain. [i.e., there will be a sufficiency in some areas and famine in the others.] In the second, the arrows of amine will be sent forth i.e., there will be a limited famine in all areas. In the third year there will be a great famine; Men, Women, and Children will perish. [source: Schottenstein Edition Tractate Sanhedrin]

A recent report from NASA states:http://www.nasa.gov/press/2014/december/nasa-analysis-11-trillion-gallons-to-replenish-california-drought-losses/
“It will take about 11 trillion gallons of water (42 cubic kilometers) — around 1.5 times the maximum volume of the largest U.S. reservoir — to recover from California’s continuing drought, according to a new analysis of NASA satellite data.
The finding was part of a sobering update on the state’s drought made possible by space and airborne measurements and presented by NASA scientists Dec. 16 at the American Geophysical Union meeting in San Francisco. Such data are giving scientists an unprecedented ability to identify key features of droughts, data that can be used to inform water management decisions.”
And another report states that taps could go dry…

http://grist.org/news/how-dry-is-california-so-dry-that-taps-might-actually-stop-delivering/
“Could California really run dry? “It often seems impossible to imagine, but tap water shortages are a distinct possibility if mitigation efforts aren’t embraced and droughts become more frequent and intense in the coming years,” meteorologist Steve Bowen of reinsurance firm Aon Benfield told USA Today.
California’s rainy season is drawing to a close — without the rain its residents had been waiting for. Though some climatologists hoped this year’s El Niño system would make a difference, the state remains horribly parched. The Sierra Nevada snowpack, which normally melts through the summer providing nearly a third of the state’s water, is at its second lowest point on record. “It looks like we are on our way to the worst snowpack in history,” Michael Anderson, the state climatologist,told The New York Times, noting that things look “pretty grim.”
So as the state braces for a fourth year of drought, state regulators on Tuesdayimposed new water restrictions, mostly aimed at reminding Californians of the degree of scarcity. For instance, as the AP reports: “Servers in bars, restaurants and cafeterias can’t bring out water with menus and silverware unless customers ask. … The rule is meant to raise conservation awareness more than save water.”The L.A. Times notes that regulators consider this latest round of actions “quite modest.” Some cities, like Los Angeles, already have local rules that are stricter than the new ones being issued by the state.” [end quote]
Is it any wonder that the State that leads the nation in deviant behavior is running dry? Even gentiles are forbidden certain behaviors by Hashem… What are 40 million people going to do when the taps go dry?
Let’s not forget there are hundreds of thousands of Jews living in California… time for those willing to abide by Hashem’s laws to come home….